About the Southern region

Serving rail users across the south of England

We want our region to be the best performing and most well-respected area of the rail network in the UK. We know that the work we carry out on the railway affects the lives of millions of people and that way we run the network can have far reaching impacts across the nation including freight distribution and international tourism.

The Southern region covers over 544 stations which are the main gateways for 700 million passenger journeys on the operational railway each year with this number expected to grow in the next five years. We serve channel routes to Europe, major ports, Gatwick and Southampton airports, and transport leisure travellers to south coast resorts and other tourist destinations.

Over 7,000 passenger and freight services operate on the region every week day – more than a third of Britain’s rail services.

Within the region, the latest figures released by the Office of Rail and Road reveal that London Waterloo remains Britain’s busiest station with 94.2m passengers using the station Between April 2018 and April 2019. Other stations in the top 10 managed by Network Rail’s Southern Region include London Victoria, ranked number two with 74.7m and London Bridge with 61.3m in fourth place.

Improving the reliability and capability of our network through renewals, proactive maintenance and first-class railway operations will deliver for our passengers and freight users by improving train performance.

This is our purpose, but we must never lose sight of the fact that the railway is an inherently risky environment. The safety of those working on and using the railway is paramount. Our safety vision is ‘Everyone Home Safe Everyday’ and is as applicable to our passengers and neighbours as it is to our workforce.

Stations we manage in the Southern region 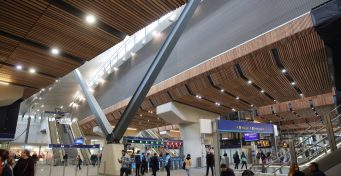 Welcome to the Southern region homepage The Southern region serves rail passengers and freight operators from Devon in the West, to Kent in the East. The region covers Dorset, Hampshire, East and West Sussex, Surrey,… Improving our railway in the Southern region

In the Southern region, we have an enormous challenge to not only maintain the 3,300 miles of existing railway infrastructure but also to upgrade it to the latest standards and wherever we can, improve it… Running the railway in the Southern region

In the Southern Region we have some of the busiest and most complex railway infrastructure in the world. Passenger numbers have doubled in the last twenty years while train services are mostly running on the…